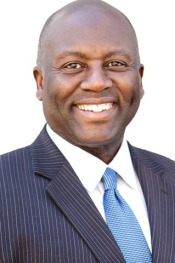 After heading up his firm, Mr. Bennett was appointed in 2011 by Gov. Andrew M. Cuomo at Empire State Development (ESD) as Executive Director of the Division for Minority and Women Business Development (DMWBD.)

In his role of executive director, Mr. Bennett was responsible for the development of the statewide MWBE procurement policy as requested by Article 15A of the executive law. He was selected to provide the leadership reflective of the MWBE economic development goals of the Cuomo Administration.

The Division’s key objectives were to encourage and assist over 110 New York State agencies and authorities that engaged in contracting activities to award a fair share of state contracts to MWBEs; to review applications submitted by businesses seeking MWBE certification; to maintain a directory of certified MWBEs to promote the business development of MWBEs through training and technical assistance, outreach efforts to state agencies and MWBEs; and to facilitate administrative adjudication of disputes related to Article 15A.

During his tenure at Empire State Development, Dean accomplished significant milestones in the MWBE landscape for New York State.  The Division’s budget increased from $700,000 to $1.6 million in FY2011/12.  Mr. Bennett increased the number of certified firms by 14% and ushered in a state-of-the art web-portal that streamlined the certification process for MWBE firms. He continued to implement the 2010 NYS Disparity Study, conducted under then Gov. David Paterson, by leveraging technology and adding additional permanent staff to the Division in certification, business development, marketing outreach and contract compliance.

In the Division’s 25 years since the signing of executive law Article 15-A, Dean hired the first MWBE Compliance Officer to serve as an enforcement audit unit to secure for the Governor’s statewide 20% MWBE goal on procurement contracts.

Before entering the public sector, Mr. Bennett served as Vice President of Business Development and Supplier Diversity Initiatives at AVournou Construction Mgt Group (AVCMG) on Long Island. At AVCMG, he was responsible for generating business opportunities and responding to government RFP/RFQs as well as privately funded projects.

Mr. Bennett also served as Director of Equal Employment Opportunity and Deputy Director for the Office of Minority Affairs for Nassau County, where he was charged with overseeing MWBE outreach and compliance for over 40 different government agencies in Nassau County. As part of these responsibilities, Dean served as project manager of the first Disparity Study in the history of Nassau County.

He currently serves on the Board of Trustees Long Island Chapter for Career Opportunities for Accounting Professionals sponsored by the NY State Society of CPA’s and he is active in the Nassau County First Tee Program. Dean serves on the Board of Regents for NYUWinthrop University Hospital in Mineola, NY.  He has served on the East Woods School Board of Trustees in Oyster Bay, New York and has been a member of the Hofstra University Alumni Board.

Mr. Bennett resides in Baldwin, New York with his wife and three children.

To schedule an appointment or find out more about the services we offer, please send us an email.

Read all news and events.﻿

Get Social with Us!